Half of my 2018 were dark times. Despite avoiding a breakdown I was able to reflect on both my past and present emotional state. It wasn’t fun I can tell you that however, it was necessary for me to avoid the path of self-destruction.

For 2019, I am more motivated than ever! Of course, I would need to translate this motivation to executable actions and commit to them. Taking a page from Anna Akana, I decided to breakdown my goals and objectives through a life map and a vision board.

Setting up my goals wasn’t that hard however committing to them might be a challenge. Especially when I finally decided to continue writing my book! Yes, I have been writing a book or more appropriately compiling poetry for either a book or a chapbook. Of course, I will not yet send it to a publisher because I would need to accomplish the first steps.

My Digital Vision Board (Glue not included) 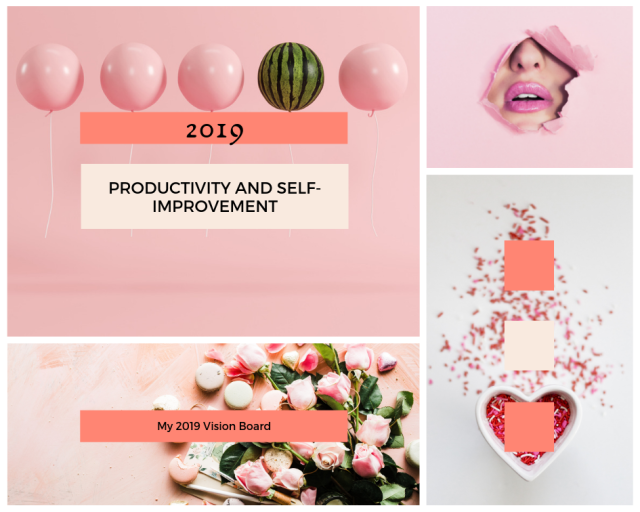 After listening to Gretchen Rubin’s podcast “Happier,” one episode focused on one-word themes I’ve decided to have my own theme for this year. Thinking of the word was simple because before I decided on my word I created a life map which included my goals for the new year. I noticed my goals all had one thing in common: increased productivity.

So the theme of my 2019 is PRODUCTIVITY. I realized 2018 was more of a year to reflect on my emotions as well as learning how to take care of myself. My pursuit of self-improvement last year had a few drawbacks when it came to my emotional stability, motivation, and productivity.

I broke down my vision for 2019 into four parts because I wanted to truly see what I want to accomplish. But they all still fit the theme of “Productivity” because this year I hope to achieve at least a little bit enough to say I was productive this year. 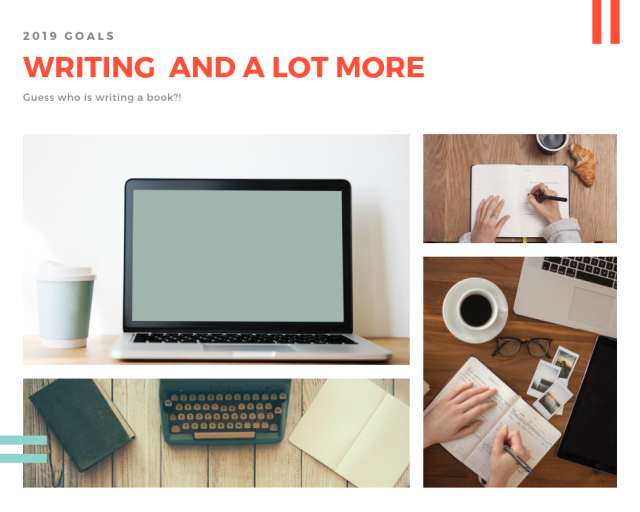 Since the start of 2019, I have written one poem and it was very depressing. You would think a poem about New Years would be more hopeful instead I wrote about feeling trapped. Writing more will be a challenge for me.

Not only have I not written anything except for a few blog posts and one poem –I am also not getting any freelance work for quite some time now. Okay fine, it’s only been two weeks but as someone who is used to ghostwriting articles three to four times a week, two weeks feels like a year. So, I’m a little out of practice unless you count the dozens of writing exams I had for a few job interviews.

This year, I want to write more than just my emotions or for work. I want to write something worth publishing or printing. Because I plan on sending some of my poetry to other sites and even publications. Nothing would happen if I don’t actually write.

Goal 2: Focusing on my emotional, mental, and physical health For the physical health, I want to become more active and start eating healthier. During the last few months of 2018, I’ve started walking more and using Grab less often (unless it was an emergency and it’s very late at night). It was not only a spending choice but also a healthy choice. Though I’ve realized I live in a city where breathing the air was almost equivalent to second-hand smoking. I am also investing in a face mask to wear whenever I go out.

Regarding my emotional health, I am taking my therapist’s advice in becoming more open about my emotions and accepting them rather ignore them. I have always had a problem with validating my own emotions. I have this habit of disregarding most of my feelings because I would tell myself I did not deserve to feel sad or happy. Now, I’m trying to shut that voice out of my head through 3-5 minute morning meditation.

Meditation is also part of my mental health. For someone with anxiety, getting out of my own head is a difficult task. I live in a constant state of second-guessing and floating on piled irrational thoughts. Meditation and mindfulness help me clear my mind.

To help me declutter my own mind from constant anxiety, I am also trying to limit my phone and social media usage. Time spent on my phone and on Twitter will be spent on reading or writing more. Last year, I’ve read only a few books and a lot were unfinished. Part of my mental health would include reading more this year. I hope to read at least 2 books a month –so far I’ve only finished Tina Fey’s “Bossypants” for January.

I cannot stress enough how bad I am with money. My lack of financial literacy has taken its toll on me and my spending habits. So far, I am spending less and did the most adult thing ever –OPEN A SAVINGS ACCOUNT! That’s right I finally made an adult financial decision which will not bite me in the ass. I’m making sure this 2019 I will not make the same stupid spending decisions I made last year.

This means eating out less or at least choosing cheaper takeout which falls into the deliciously healthy category. My living situation is still the same where my commute is part of my spending issue as much as the non-cooking situation. Because aside from food I also need to watch my spending diet. Here’s hoping I save enough money where I can live somewhere I can cook my own meals.

If you ask fresh out of college me from two years ago, I would tell you I am a career girl. Ask me now and I’ll answer you with bullshit gibberish that almost sounds intelligent enough to convince you that I am a career kind of girl. Sadly, I have hit another quarter-life crisis and existential crisis. I’m not yet 25 yet I already feel the sense of being rushed to choose my career.

Now, if you ask me what career path I am headed I will give you another mindless yet eloquent answer which sounds impressive but is mostly bullshit. Because I have no idea where I want to go!

Do I want to be a writer? I love to write but the idea still feels off for me –she says as she types another thousand-word blog post and a book. I mean I still want to pursue a career in writing yet I feel as if it isn’t enough.

Do I want to be in advertising? There is no such thing as ethical consumption in the world of Capitalism so why not join in the game.

Right now, I’m dipping my toes into either Public relations or Digital start-ups. Maybe learning more about fields somewhat related to my degree can help me out. If not then at least I know I learned a few lessons which would be beneficial along the way.

I’m a twenty-something who is trying to start her adult life properly. It now depends on my own perseverance, commitment, and audacity. However, every year is unpredictable no matter how much I plan or vision boards I make. I think another one-word theme I should’ve considered was “Flow,” which means ride along and keep myself in check.

Life happens, I can still push through with my already mapped out plans but I’m always willing to take a detour.

Everything will be fine.